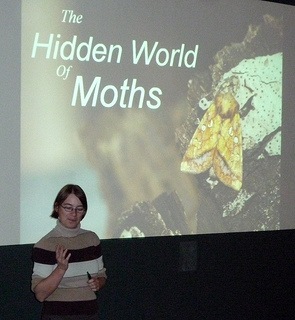 (A [somewhat unflattering] candid photo of me giving the very first presentation of the tour, taken by Darrin O’Brien at the Dearborn, MI, event)

So here’s the post series on the moth guide book tour, finally! I didn’t actually take very many photos while I was gone, and in retrospect I wish I’d taken more. At the time I was fully occupied with just running the events and enjoying myself, and not too worried about photos. I figured other people would probably take some, and travel photos end up just sitting around once you get home anyway. So a lot of the images I’m using will come from other folks (I’ll link where I can), and a few events won’t have any.

I had a fabulous time on this trip. I met a lot of awesome people, made a bunch of new friends, saw a pile of great moths, and overall had a really good time. Thanks to all of my hosts for inviting me out (and, often, feeding me and/or putting me up) and to all the people who attended for their enthusiasm.

Dearborn, MI: April 29
The tour got off to a great start with this first event at the Environmental Interpretive Center at the University of Michigan-Dearborn, co-hosted by the Rouge River Bird Observatory which operates out of the EIC. I got to meet longtime online-friends Julie Craves (of the RRBO) and her husband Darrin O’Brien, who took me to dinner and helped me with the evening, along with the EIC’s director, Richard Simek. The Dearborn crowd were my guinea pigs for the presentation I was doing on the tour, but everyone seemed gratifyingly interested. We were expecting cool temperatures and were pleasantly surprised when the afternoon turned out to be beautiful and sunny, and pleasantly warm. I’d been so worried that we’d have near-freezing temperatures and no moths in the evening, but I needn’t have fretted – we had a good selection of things come in, given the early date, and I think everyone had a good time. Julie wrote up a summary of the evening, complete with photos, on the Rouge River Bird Observatory’s blog. 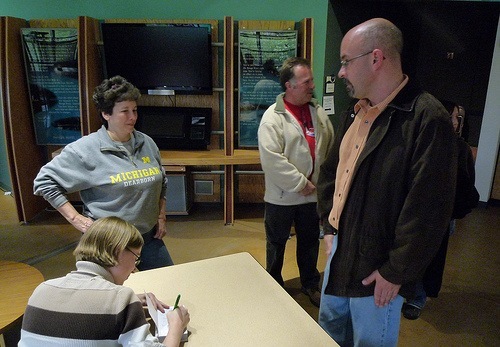 (Signing books at the Dearborn event, with Julie Craves, at left, looking on. I’m afraid I unintentionally stole that pen at the end of the evening. Photo by Darrin O’Brien) 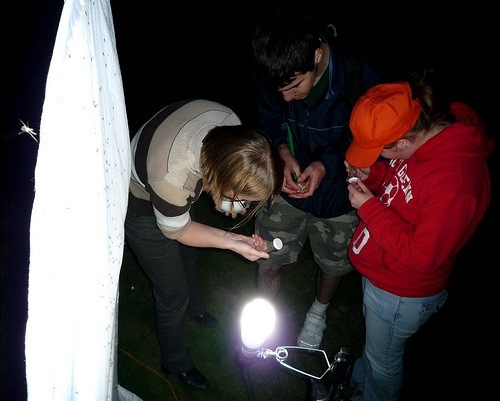 (Identifying a moth for a couple of the event attendees. I’m holding a bowl of ice cream in my other hand. They make their own maple syrup at the EIC and we were invited to try some, served over vanilla ice cream. It was delicious. Photo by Darrin O’Brien)

East Liberty, OH: April 30
I traveled about three to four hours each afternoon, from one event to the next. The second evening found me northwest of Columbus, OH, at the Big Darby Headwaters Nature Preserve. This is the only event that I truly regretted how it turned out: we got the sheets and everything all set up, and then just as dusk was falling a thunderstorm rolled in. It lasted for just about two hours, and by the time it had blown through, at 10:30, pretty much everyone had had to head home. We did set up a sheet inside the wide mouth of the big tractor garage that sheltered us, and got perhaps a dozen moths, but it wasn’t quite what I’d hoped for. Additionally, the pounding rain on the steel roof was too much for my quiet voice to compete with, so I wasn’t even able to do a presentation or anything, though I did sign books and try my best to answer questions one-on-one. The organizers were Steve Ross of The Nature Conservency-Ohio and his wife Jennifer Kleinrichert, as well as Janet Seeds and Chrissie Wilson, who were all incredibly nice and supportive. The photos of the event were sent to me from them later. I stayed the night with Donna Daniel at her amazing, beautiful farm; Donna was wonderful and gracious and made a delicious breakfast. No link for this event, but you should check out Steve and Jennifer’s farming/homestead blog. Also their Etsy shop; they thanked me for coming with a couple of bars of their handmade soap, which are beautifully made and smell wonderful. 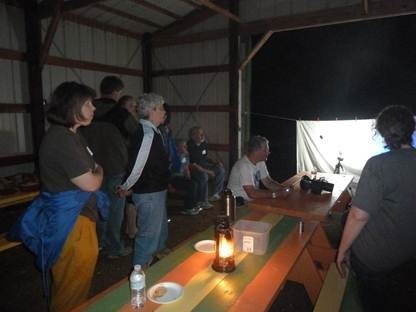 (The one moth sheet and event attendees at the East Liberty, OH, stop; they all look like they’re listening intently to someone, but as I didn’t do any speaking I’m not sure who. This photo and the next two supplied by my hosts) 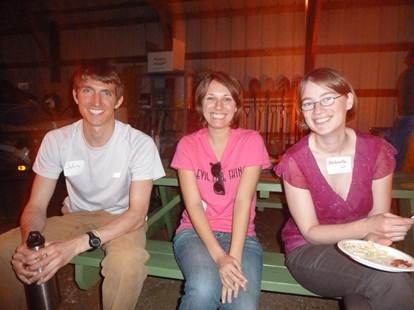 (Two volunteer helpers, John Cannon and Chrissie Wilson, and me. I’m glad they look like they’re enjoying themselves.) 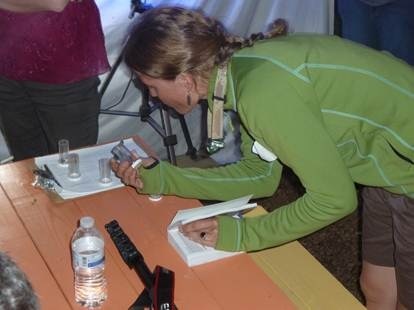 (Jennifer Kleinrichert and a handful of the moths we got that stormy evening. I suppose I should be grateful that we got any at all, given the weather.) 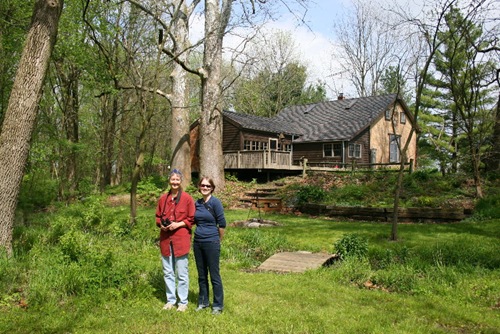 (Donna Daniels and myself in front of her beautiful old farmhouse. I wish I could have done some mothing here, but rain overnight kept me from putting out my trap. The daytime wildlife was amazing, though. I got my first-ever good look at adult Red-headed Woodpeckers, and she had a Clay-colored Sparrow coming to her feeder. A huge Fox Squirrel, a species we don’t get in Ontario really, made an appearance. Birds and frogs and insects everywhere.)

Wheeling, WV: May 1
This event was the first of a couple that I did as part of the Master Naturalists education series, though it was also open to the public. This one was held at the Good Zoo at the Oglebay Resort in the beautiful foothills/mountains of northern West Virginia. Being a class as well as a book-signing event, I offered the attendees their choice of presentations: the one on moths in the environment that I’d prepared for the trip, or one I’d presented a year and a half ago on tips to get started in mothing. They chose the latter. I think they were perhaps expecting a primer on identifying moth families or something along those lines. Instead, I talked about the attraction of mothing, and gave them five “rules” for learning:

Rule 1: Start with the common species. Leave the uncommon stuff for next year.
Rule 2: Learn what’s flashy. This stuff’s easy to identify and also to remember.
Rule 3: Learn the rest in groups. Learn one family this year, another next.
Rule 4: Don’t be afraid to leave some stuff on the sheet unidentified.
Rule 5: Have fun. It’s so easy to let yourself get overwhelmed by how much there is to learn, but the whole point is to enjoy it. Scale back if you’re not.

Another thunderstorm (complete with tornado watch!) rolled in that evening, but we lucked out and got in an hour of mothing before it arrived. Because the weather was so warm and humid we got a really great selection of moths; perhaps a couple dozen species, including a couple sphinxes and a Rosy Maple Moth that were crowd-pleasers. I got my first lifer species at this stop: an Eyed Paectes*. No photos from this event, nor online summary; it was a bit of a whirlwind evening because we all had an eye to the sky, anticipating the rain. I didn’t even get a pic of the paectes, unfortunately. Thanks to my host Penny Miller for both inviting me to this event and putting me up at the Oglebay Resort, which was a beautiful place. Didn’t get a chance to visit the actual zoo, though.

*I was actually surprised by the proportion of moths I could identify, even at my farthest-south stops. Most of what we caught was also stuff I get back home, and a lot of the stuff that was new to me was stuff I was familiar with just from having worked on preparing the guide (eg: Eyed Paectes). There were some instances where I had to pull out a copy of the book to check things or look stuff up, but not too many compared to what I’d been expecting.

I think in the interest of length I’ll wrap up part 1 there, but I’ve lots more to share from the trip. Stay tuned!