I’ve been waiting for a really nice, sunny, mild day to head out with my cordless drill to clean out our nestboxes, and the weather conditions were perfect for it this afternoon. I took photos and will follow up on that on probably Wednesday.

While I was out there, though, I saw a number of other critters enjoying the sunshine like I was. I spotted a few fuzzy caterpillars, mostly Woolly Bears like the above. They emerge so early, I don’t actually know if they spend any time eating before they pupate. There wouldn’t be a whole lot to eat yet. Although, I did spend some time raking out our garden, and the first shoots of daffodils and croci are coming up, as is the rhubarb. And quite a number of plants stay evergreen under the snow. So maybe there would be enough.

On the way back to the house I came across this guy, who I initially mistook from a distance to be another Woolly Bear, but who turned out, upon closer inspection, to be a Giant Leopard Moth caterpillar. I still get inordinately pleased whenever I discover one of these guys, even though they’re not uncommon here. We didn’t have them where I grew up (or if we did, I never noticed them); it wasn’t till I moved east that I started seeing them. So I still get that thrill of somethingcool! when I find one.

As I was walking back from the last nestbox I noticed a robin off some distance away in the forest, making a lot of noise in the leaf litter. I’d brought my binoculars with me (something I don’t always do, since I do most of my birding by ear these days and it’s one less thing to carry around) so I was able to watch him closely. After a moment or two he picked something up, dark and thick and C-shaped, carried it a short distance, then plunked it down in the leaf litter. I’m fairly certain it was a dark fuzzy caterpillar like one of the two above. I think he might have been trying to de-bristle it prior to eating it. 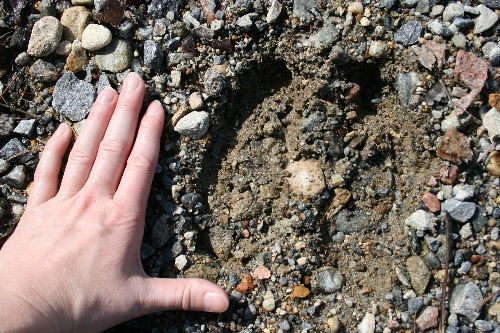 I made a brief detour out to the rail trail and walked down to the creek, and discovered these tracks out there. What first caught my eye was the size of them. Certainly much bigger than any deer I’d seen around here. They’re cloven like deer and domesticated ungulates (except horses/donkeys), but there was really only one animal I thought could make something that large, at least that I would reasonably expect might be found walking down the rail trail. Which is a moose, of course.

Having seen a moose in our back fields last fall, this wasn’t quite the stretch that I might have otherwise thought it. It’s possible he’s hung around the area, in one of the swamps nearby, keeping out of sight. I took a few photos and double-checked my tracks guide when I got back. They seem to be potentially confusable with domestic cows, with the main distinguishing feature being the front of the track – the hooves are pointed in moose, but rounded in cows.

You can’t see it as well in the first photo, but you can tell in the second that the front of the tracks are pointed. It was pretty clear in person, too, that the paired hooves were long and tapering at the front. They were relatively fresh… I didn’t notice them on my way out, only on my way back, though that’s not to say that they weren’t there and I just missed them on the way out. I tried following them to see where they went, but they seem to curve out from the fenceline and then back into the fenceline. I can only presume he jumped the fence, then got spooked after walking only a short distance down the trail and jumped back. And yes, moose, like all deer, can jump:

Photo by Bruce Barrett (nordicshutter) on Flickr; CC-licensed (the only such photo I found of a moose jumping, though there are others that are not CC)

One thought on “Cats / tracks”