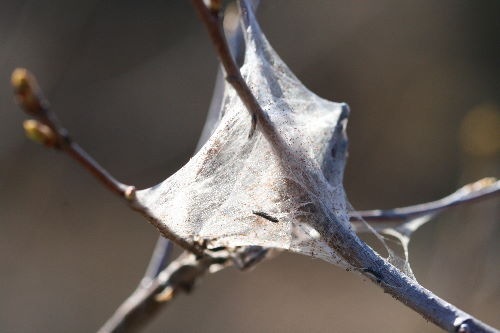 A week ago when I was out with Raven a glint of white in one of the black cherry trees in our back fields caught my eye. Wondering if it could possibly be a tent caterpillar nest so early in the season, I checked it out. Sure enough, it was. This feels very early to me, but I admit I’ve never caught the nest at such an early stage before, barely started. Normally I check in when it’s already the size of my fist or thereabouts. I start noticing them (without having to consciously search) in early May usually. Was it just that I was paying attention this year?

Part of the reason I was watching was because of the warm spell we had in March, of course. I worried that it would not only accelerate the budding-out of the trees and shrubs, but also the growth and emergence of early-spring species. I did, in fact, have an Arched Hooktip (a moth) show up at my light one night at the end of that week; ordinarily the species first shows up in mid-May, so it was nearly two months early. It didn’t seem a stretch to think it might have prompted the tent cats out prematurely, too.

When I investigated more closely I discovered all the little caterpillars in this particular nest were dead; blackened and unmoving. We’d had several nights in a row of freezing or just-below temperatures, including one hard night of several degrees below. I wondered if that had killed them. Tent cats use their tents to help thermoregulate, and I would assume that, since we still get frosts potentially as late as mid- to late May most years, it also serves as protection against frost. But the little nest of these cats was still so small, perhaps the size of a plum. Maybe it didn’t provide enough protection.

When I did my usual late-winter walkabout searching for tent caterpillar eggs I only found a few clusters, all on the same tree. The other trees that have had them in most past years didn’t have any, so I was already starting to wonder if it’d be a year of low abundance for the species. This freeze won’t have helped, if it’s killed all the caterpillars from this egg cluster. I couldn’t really tell if all the eggs had hatched or only some of them. I’ll hope some hadn’t hatched yet and might go on to build a new nest.

In another field I found a second nest. This one was larger and the caterpillars on it obviously older – and, happily, still alive. They were clustered together sunning themselves on the surface of the nest, which they’ll do on cooler days. This nest was closer in size to an orange, so I wondered if the extra layers of silk had helped protect the caterpillars against the cold.

They’d already started making their silken trails up the branch from the nest to their feeding location. This is one of the reasons tent caterpillars appeal to me so; there’s so many neat aspects to their biology that are fascinating to look for. They leave this trail as they walk so they know where the nest is when it’s time to return. The nest is their protection from both the elements and predators, so you can understand the desire for a lifeline like this.

These were the buds the line was leading up to, though. The whole tree was like this. There can’t honestly be enough plant material there to sustain them yet, can there? I guess they’ve got little mouths and wouldn’t eat very much, so maybe there would be. The nest was full of frass (see the little brown dots in the photo with the sunning cats), so they were obviously eating something, and it was orangey-brown like the bud sheathes here.

I’ll be keeping an eye on these guys over the next little bit to see how they do – not that there’s much I can (or would) do if the weather goes cold again. But I like to keep tabs on my local families of wildlife, and tent cats are such easy ones to monitor…