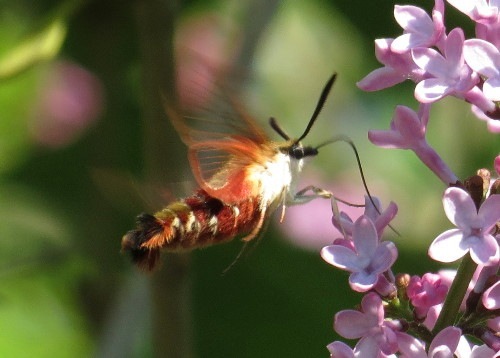 Our lilacs have been done blooming for a while now, but in the days following my return home from the book tour they saw a lot of activity from pollinators: bees and butterflies, flies and moths. Including these three, which happened to all show up at the bush by the house during the same afternoon; an extremely rare treat.

The above is a Hummingbird Clearwing (Hemaris thysbe), sometimes referred to as a “hummingbird hawkmoth”. It’s the most common diurnal sphinx moth around here, and nearly all of my sightings of sphingids at my garden flowers are this species. They’re reasonably abundant, with near-daily sightings once our phlox and bee-balm/bergamot start blooming. The name, of course, comes from their resemblance to mini hummingbirds, with which they share the same behaviour of hovering in front of flowers while feeding and darting quickly from one bloom to the next.

This one is the closely-related Snowberry Clearwing (H. diffinis). I’d never seen this species before, so I was pretty excited when Dan found the individual and called me over. He’d actually seen them once, earlier this spring, down in Frontenac Provincial Park near where we used to live at the lake house. I think they’re probably relatively widespread around here but simply not very abundant. They’re actually found across more of the continent than Hummingbird is.

While the Hummingbird has a fair bit of red to it and a solid green back, the Snowberry lacks much red and shows two pale stripes running down each side of its back, giving it a yellower look. There’s a third species, too, Slender Clearwing (H. gracilis), which is similar to Hummingbird but has a white border along the red and a red stripe going up the side to the eye; it’s the most uncommon of the three (I’ve never seen it) and restricted to the northeast. All of the members of genus Hemaris are called clearwings because of (duh) their clear wings, though they also share this common name with a group of wasp-mimic moths that also nearly all have clear wings.

And the final species to show up at our lilacs was a Nessus Sphinx (Amphion floridensis). I had actually seen this once before, but not very well and not for very long, and hadn’t really gotten a good photo. So I was quite pleased about this one, too. Unlike the other two, this one belongs to a different genus and has solid-coloured wings. The distinctive identifying feature is the pair of yellow rings around the abdomen (though these can sometimes be single; this might be a regional variation, I’m not certain).

The three species fly most of the year, from mid-spring till the end of summer, so even though our lilacs are done blooming now there will still be the opportunity to encounter them again. Definitely the Hummingbirds will be back once the phlox starts to flower.

(All photos taken by Dan, whose camera was the one on hand and who knows how to work it a lot better than I do. Sadly, I’ve gotten so used to the manual-ness of my DSLR I can’t figure out a point-and-shoot anymore…)