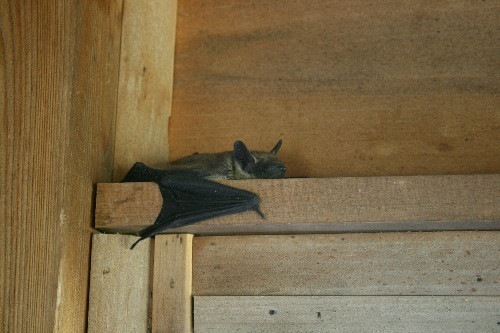 I’ve been doing that thing again where I get distracted by other projects and forget to post here. Sorry about that. It’s been a busy month and promises to be a busy month to come.

Here’s something from a few weeks ago. One morning Dan discovered this guy (or gal?) on the screened-in porch. I believe it’s a Big Brown Bat (thank you to PFG to Mammals author Fiona Reid for correcting my ID!), one of the most common around here; we’ve got a colony of these (whichever species they are) that occasionally take up residence in the cracks of the beams above our front (open-air) porch. They’ll stay for a few days then move to a different roost for a while. We always know when they’re there because the porch beneath becomes littered with bat droppings.

Dan propped open the door hoping the bat would let itself out while he took care of some chores inside, but when he returned a while later it had settled down on some trim up near the ceiling and fallen asleep. I’ve heard that you’re not supposed to move bats during the day, and since it wasn’t at risk of bothering anyone there we decided to leave it till evening. It stayed put, barely moving, till dusk.

As the sun started to set it began to shift. It crawled over the edge of the trim and hung there, tucked into the corner, still looking very sleepy. I decided that was my cue to shift him outside; we’d let the cats come out while the bat was asleep (they’d remained completely oblivious) but once it showed signs of waking up I didn’t want to take any chances.

I donned gloves and got a kitchen towel to collect it up in. Unfortunately, in my concern about injuring it my grip wasn’t firm enough and it slipped out. Still dozy, it basically glided to the floor where it sprawled with its wings out. What a neat opportunity to see the intricate structure of the wings and tail. And look at those tiny toes on the back feet! They and the thumb, at the “wrist” of both wings, are long and thin and designed for clinging to stuff since the bat doesn’t really have the option of using its hands. Still, it’s more than birds have.

Those wing bones are incredibly thin and delicate. Birds, of course, have evolved to have hollow bones that helps to reduce the amount of weight they need to get airborne. Bats don’t have hollow bones so they just have to be smaller in the heavy bits. It also helps, however, that the long finger bones allow bats to make shapes with their wings that other flying creatures (birds and insects) can’t – they use this for producing novel mechanisms for increasing lift, to compensate for their greater weight.

Bats are amazing creatures, really. Besides just the flying, they’ve got the really cool ability to echolocate, something shared only with some cetaceans, a couple species of birds, and a type of shrew. (Only certain types of bats echolocate, however – microchiropteran bats, the nocturnal insectivores; flying foxes, the fruit bats, don’t.)

Those big ears are important for catching the sound as it bounces back. It’s a complex skill involving the measurement of time between making the sound and hearing the echo, the time between hearing the echo in one ear versus the other, and the intensity of the sound for one ear versus the other. This is mostly done instinctively, below the level of consciousness. We do some of this ourselves already, in being able to identify from which direction a sound has come from. The only difference is that the bats are listening for echoes of sounds they produced themselves.

Remarkably, it’s possible for some blind or visually challenged people to develop a form of echolocation to help them navigate their world. Their visual cortex is repurposed for processing sounds instead of sights. The YouTube video above (also here) is an amazing example. 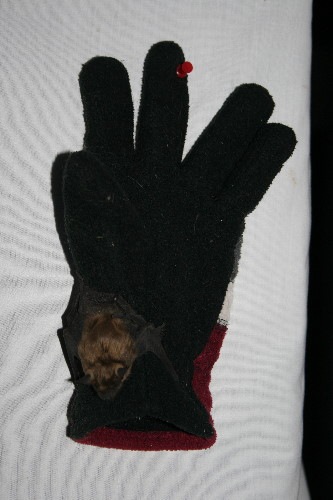 The bat climbed up onto my glove easily once it was on the floor, and I took it and tacked it up to the side of the house (a convenient advantage of wooden logs). It still seemed sleepy and not ready to head out yet, so I left it; when I checked back half an hour later, it had gone.