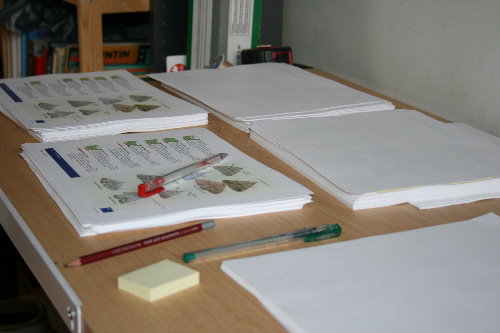 …I’ve been hard at work on the moth proofs. I’m at 45 hours (and counting) spent bent over my drafting table, red pen in hand. Most of these hours have been spent in drawing in the arrows that I dearly hope all you good folks are going to make effective use of in identifying your unknown moths. Doing it forced me to really pause and think about what features I refer to when I recognize a species, how it is I know a species is what it is and not something similar. I’ve learned some interesting and, on occasion, surprising things about the identification of even the moths I’m already familiar with.

…I’ve been setting out my moth light most nights it’s warm and dry enough. Trying to lure in some interesting species so I can take their photos to include among the selection we’ll send to our book’s designer for use on the title pages. We sent them some already, but they turned out to mostly be the wrong orientation. A few nights ago I had some eight underwings come in, half of which were White Underwings like this guy.

…the leaves have been turning. In the past few years our autumn colour has peaked around Thanksgiving weekend, which here in Canada is the second weekend of October. Next weekend, this year.

But it feels like our trees have already peaked. There were vibrant colours among our fields last week, which I’d appreciate when I took the dogs out for some exercise and so I could straighten my back for a brief period.

I wonder if it’s because of how dry and sunny it’s been this year? There seem to be a whole lot more reds than there were the year before. The maples in our yard have turned fairly orange, but last year they seemed more yellow (though maybe it’s my imagination). Reds are controlled by light levels and temperatures (I explained the process in more detail in this post), with bright, cool days producing the most colour, so perhaps. The cool weather has definitely arrived, though we managed to hold off our first fireplace fire (the sole source of heating for our home) until October 1, which I thought was doing better than usual.

…the milkweed has peaked, too. We had a stretch of beautiful sunny days where all the pods seem to split and the fluffy seeds puffed out, waiting to catch the wind. I couldn’t resist kicking at the stalks as I passed, spreading the down in a snowy blanket across the grass.

…and the Woolly Bears have started trundling from the plants where they grew up to look for a spot to spend the winter. This has got to be the tiniest Woolly Bear I’ve ever encountered. I presume he’s very young, relative to most of the ones I find. I hope he finds someplace cozy

One thought on “During the break…”