When Dan came inside a couple of days ago he told me, “There’s a blog post for you over by the shed. All over the snow.” Figuring there’d been a predation out there and I’d had a murder scene to dissect, I grabbed my camera and went out to investigate.

But instead of finding fur or feathers, I found… purple stains?

It didn’t take much detective work to guess what these were from. We’ve had a flock of waxwings hanging about the last week or so. I’d thought they were Bohemians, the first time I noticed them, but I had no binoculars and the year since I’d last seen Bohemians had left my ear a little rusty. They turned out to be Cedar Waxwings the next time I saw them. (In my defense, Bohemians are much more common around here in the deep winter than Cedars are.)

The stains, of course, are the waxwings’ droppings, dyed purple by the berries they’d been eating. There aren’t a lot of purple berries available at this time of year; wild grapes and buckthorn would be the primary candidates. At the centre of most of the stains was either a bit of berry skin or some seeds, so I took a closer look to try to determine what they were eating. 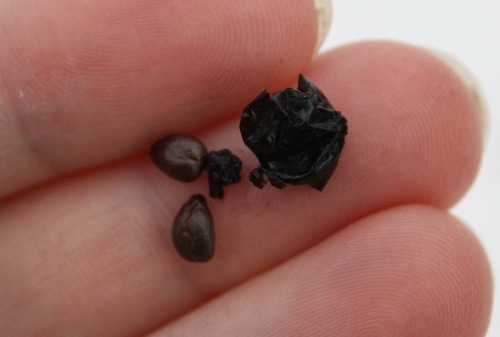 It doesn’t help that wild grapes and buckthorn berries are both roughly the same size, especially after having passed through a digestive system. I took a photo of the bits, with my fingers for scale, figuring I’d try to look them up.

I first tried googling buckthorn berry seeds to see if I could find any images to confirm that’s what this was – I know what domesticated grape seeds look like, but don’t know if the wild type look the same, and I’ve never opened up a buckthorn berry. When that turned up nothing, I thought, you know, the easiest way to confirm this would be just to go get a buckthorn berry and see.

I write most of my blog posts in the evenings or, often, late at night. So this thought occurred to me at about 11:30 pm. After some minutes of weighing it in my mind, I finally decided that yes, in the interest of completeness, I’d venture out and find a buckthorn berry. Just to be sure.

I bundled up, grabbed a flashlight, and called to Raven. (Perhaps strangely for someone whose primary interest is a nocturnal taxon, I’m somewhat afraid of the dark. Fortunately, all the snow in the winter means it never gets really dark at night.) We ventured out to the one location on the property where I knew there were some buckthorn. The shrub was mostly empty, but a few lone berries remained.

Upon returning to the house with one, after stripping off all my winter garb again, I broke it apart on a kitchen plate. Inside the thin skin were four blunt-ended teardrop-shaped seeds that looked exactly like the ones in the droppings. Combined with the fact that the buckthorn shrub had been cleaned out, I’m pretty confident in saying that that’s what the birds have been eating.

Edit: Super-smart bird-poop expert Julie Craves comments that these are probably, in fact, wild grapes. D’oh! Check out her explanation in the comments for why.

I blogged about buckthorn a little over a year ago, and commented on its potential benefits to wildlife. It’s kind of nice to see our local wildlife making use of an invasive plant like this, especially since it’s one of those species that’s been so successful there’s probably little hope of eradicating it anymore.