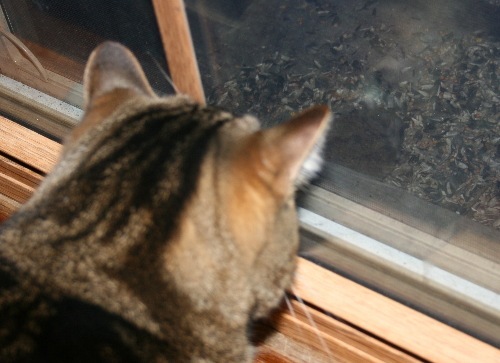 I missed last week’s post, busy preparing for a wedding, and yesterday, catching up from the wedding; apologies! But I’m super excited about today’s post. I was planning on another topic for this evening, actually – I’ll end up doing it this weekend, perhaps. But as I came down to check on the fire I noticed Oliver was hunched over, peering out the window at something at the window feeder. He does this regularly, and always when I go over to look there’s nothing there.

But this time there was! A small, furry brown body was curled up right at the window’s edge, its back to the house. I thought at first it was a rat or mouse, but then it stretched out to grab a seed and I got a good look at its eyes. They were huge! This was no rat – it was a flying squirrel! 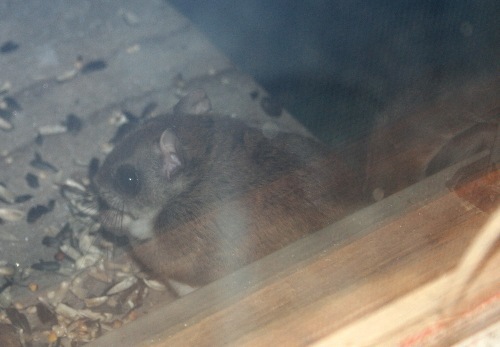 I knew we had flying squirrels around here because I’d found shredded cedar bark in one of the nestboxes a couple of years ago. The box actually wasn’t that far from the house, but I’d never seen evidence of them visiting the feeders (on the other hand, I don’t know exactly what I’d be looking for). I have, however, on occasion heard little feet scampering up the side of our log house while I’ve been working in my study late at night. I know that sound from the daylight hours when the Red Squirrels run up and down to the feeder. I guessed that the nighttime scamperings must therefore belong to flying squirrels – but I’d never seen one till tonight. Here or otherwise. 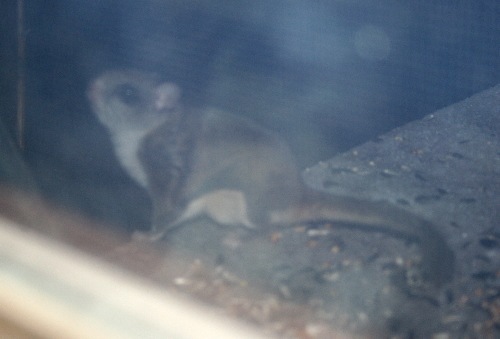 There are only the two species of flying squirrel in North America (though there are a few subspecies). Ours are most likely Northern Flying Squirrels, though we’re near the northern edge for Southern Flying Squirrel, too. There are visual differences between the two species if you get a good look at one, including size, but they’re most readily distinguished by habitat preference, with the Northern preferring mixed or coniferous forests and the Southern largely mature hardwood forests, especially Carolinian. Our forests around here are pretty strongly mixed. 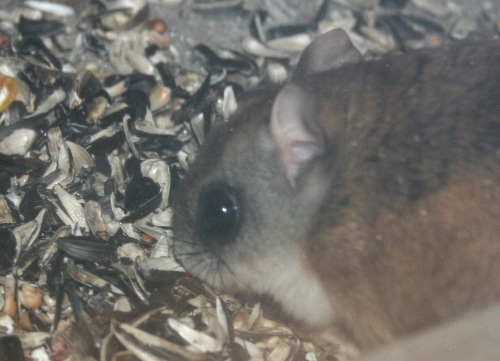 The flap of skin between the front and back legs can only be easily viewed when the squirrel is gliding, of course, though you can sometimes see the wrinkle there when they’re still. They’ve also got flattened tails that presumably help with steering when they’re in the air, and oversized eyes to help see in the dark. They’ve got a varied diet and are pretty opportunistic about what they eat, but Wikipedia suggests the bulk of their diet is truffles (various types of underground fungi), which they sniff out with their nose. 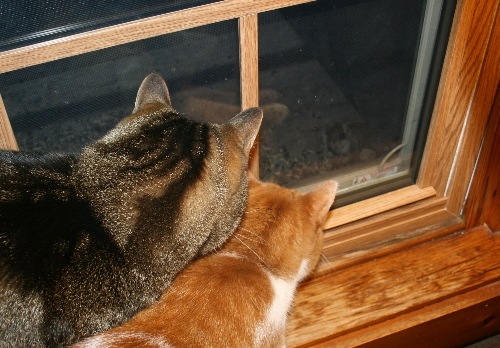 Obviously, they also eat birdseed. We have our feeder set up so one side of it is butted up against the house, below the living room window. The cats and Jack love this. Jack’s mostly interested in the Red Squirrels, while the cats prefer the birds. The critters at the feeder learn pretty quickly that what’s going on behind the glass has nothing to do with them and they’re free to keep eating. All of our animals will paw at the window or press their faces right up to it, but it doesn’t bother the critters at the feeder in the least.

Apparently the flying squirrel has learned this, too. It sat not four inches from Oliver’s nose, just a couple panes of glass between it and some sharp teeth. But it was very confident in those panes of glass. Charlie came and joined us after a bit (the two of them made it a little hard to get any pictures). I could put the camera right up to the window, the lens knocking against the glass and the flash going off at regular intervals, and the squirrel would be completely undisturbed. It’s too bad there’s a screen in the window; it makes it hard to get good shots. The smeary nose prints all over the glass doesn’t help, either. ;)

I hope he’s a regular visitor! I think it’s so cool we’ve got a flying squirrel coming to our feeders.