The teabags I use for everyday use are of the two-cup sort. I sort of felt like I was wasting half a teabag when tossing them into the compost after just one use, so for a while I’d started saving them on a plastic lid for a second use later in the day (and since I usually have multiple cups in a day, they didn’t normally sit long). This stopped last week when, upon lifting the saved teabags, I discovered a silverfish underneath.

I very nearly dumped the silverfish along with the teabags, but changed my mind in time. This isn’t the first silverfish I’ve ever seen and it definitely won’t be the last, but it was the first one that was on a conveniently portable surface that I could set up my camera over. And it was being remarkably cooperative, sitting still while I moved the plastic lid around. It might be the best opportunity I’d get for a silverfish photo, at least foreseeably. 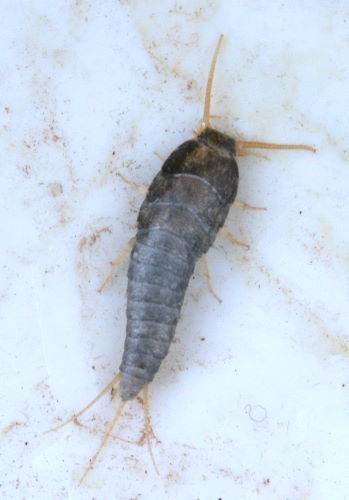 There are apparently 18 species of silverfish in North America, organized into three families. Of these, one species (in its own family) is found exclusively in carpenter ant nests in forests of northern California and Oregon. Another four species (in the second family) are restricted primarily to caves, termite nests and other subterranean habitats in the southeastern US. The rest (in the third family) are widespread and found in many habitats. Two are found around the world and are common inhabitants in our homes: the Common Silverfish (Lepisma saccharina) and the Firebrat (Thermobia domestica). The former is typically resident of our damp areas, most usually the bathroom, while the latter sticks close to heat sources and is normally found near furnaces, hot water heaters, insulated ductwork, etc. This one is a Common Silverfish. I’ve never seen a Firebrat.

I have to admit I’ve always been fascinated by silverfish, in a slightly creeped-out way. Their fluidity of movement is sort of unreal. Till now I’d only ever observed them in washrooms, and I was perfectly happy for them to stay there. However, they’re not harmful in any way, really. They don’t bite, and don’t spread disease. They’re vegetarians, with a sweet tooth: their scientific name, saccharina, refers to their preference for sugars and starches. They’ll take these where they can find them, be it glue in wallpaper or book bindings, starches in natural fibres (both cloth and paper), or food scraps or other biological material. (Wikipedia lists dandruff, even.) But if necessary, they can go without food or water for weeks.

An individual silverfish can live as long as two to eight years. Think about that. If you moved in the last few years, there might be silverfish in your house that have lived there longer than you have. Fortunately, they’re not that prolific; a female may lay fewer than 100 eggs in her lifetime. And a healthy household population of earwigs, spiders and house centipedes will also help keep their numbers down.

I’m sort of tempted to paint a dot on the back of the next one I find, except they continue to moult even as adults, so it might shed the dot before the next time I see it and I’d never know. I guess I’ll just stick to watching from a distance.